If you are wondering if there are compelling reasons to visit Urquhart Castle lets look at what a visit could offer you. With so many (over 3000) Castles in Scotland it is really hard to settle on just how many and which Castles to include when you are visiting.

For some people the attraction can be the dramatic location of the Castle – for example the clifftop location of Dunnottar cannot be beaten. For others it is just the sheer splendid size and history associated with the Castle and Edinburgh and Stirling Castles would be perfect examples in this instance. For others it is just the iconic recognition of the Castle and of course Eilean Donan Castle would is a great example of this. And that is before we consider any Outlander sites.

Urquhart Castle represents an integral part of history for Scotland both past and present. As one of the most visited Castles and one of the largest Castles in Scotland there are many reasons to visit.

Just viewing the Castle from Loch Ness does not give a true representation of the size of the Castle, you have to walk through it to appreciate it’s past significance. 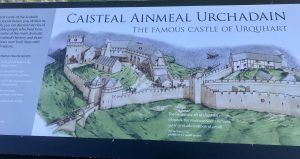 First a Pictish Site we know that an extensive fort existed on the site between the 5th to 11th centuries. Possibly visited by St Columba in AD580 who reputedly encountered a monster in the Loch. In 1275 the Castle was given to the Comyn family known more locally as the Wolf of Badenoch and more infamous locally for destroying Elgin Cathedral.

Subjected to constant battles particularly during the Wars of Scottish Independence, then a Royal Castle before being given to Clan Grant this Castle is an important connection to Highland history.

From the mid 1300s the Castle was frequently raided by the MacDonalds – the Lords of the Isles. Today as we travel around Scotland I think you have just to marvel at just how far people did travel in their lives. I often wonder at how long it took them and how wet and cold they might have been. 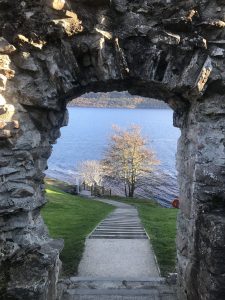 With roads almost non-existent it was often easier to travel by boat. Much of the Castle supplies would be delivered via the Watergate including exotic imports of oranges and wine.

Whilst Castle inmates were beseiged during 1689-90 conflicts the garrison held out due to supplies smuggled in via these very gates.

So  spending time exploring the Castle on foot is worth it just to appreciate the sheer size and magnitude of the site, not to mention the views of the Loch from the Castle.

Owing to the Highlands being strong supporters of the Jacobite Cause this Highland Castle was destroyed by the English in 1692 in order to prevent Jacobite troops benefitting from it’s location meaning much of the Castle is reduced to a rubble.

Worth noting this was 54 years before the final Battle of Culloden and only more proof of the number of historical conflicts that revolved around this huge stronghold.

As you approach the Gatehouse take a second look at the size of the Masonry block beside the gate. Then relate that to the replica of the Trebuchet that you will have walked past and imagine the efforts involved in bringing about the destruction of this enormous Castle.

This only serves to demonstrate just how huge the Castle was and how people benefitted from the location. As you walk down from the Visitor Centre consider the grounds below you and imagine the multitude of workshops and activities that must have happened in this area.

To give you some idea of the importance and size of the Castle remember that during Great Raid of 1545 by the MacDonalds items raided from the Castle included 3000 sheep, 2000 cattle, 400 horses, 3 boats and much more. 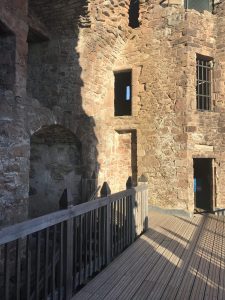 The most intact part of Urquhart Castle is the easily recognisable five storey medieval tower built by Clan Grant. Here you do get a glimpse of how people lived their lives in a Castle on Loch Ness.

So sadly whilst there is not a lot of Urquhart Castle left to see just spending time exploring the sheer size of the site and the importance of Urquhart in Scottish History makes this a wonderful Castle to put on your visit list.  And of course the views are better than you can imagine.

My top tip is to approach like a Clansman and take a Loch cruise that combines both the Loch and a walking tour of the Castle. That way to get the best of the Loch by land and water. 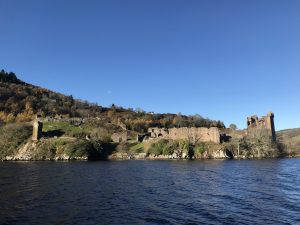