J is for Just not to be missed Castle Findlater when you staying here at Blervie House.

Staying at Blervie House means you have a unique base for exploring. You can go westwards towards Culloden and Loch Ness or meander southwards and explore the Cairngorms; you can also drive along the stunning Moray Coastline.  Visitors tend to either walk The Moray Coastal Path or drive the Moray Coastal Route. Whatever your means of transport, this is likely to take you to both the Bow Fiddle Rock and Cullen. 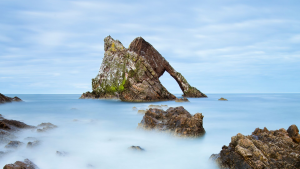 From Cullen, venture a little further east into Aberdeenshire; don’t miss the little known but stunning Castle Findlater. The name Findlater seems to be Gaelic for the white cliff, and the first record of a castle here goes back to 1246. Perched high upon a northern point of the Moray Coastal Trail, this castle is in a stunning position. How and why they chose to build in this location can only be marvelled. Another consideration ought to be how cold was it in Winter!

Findlater is one of the most dramatically situated of any Scottish castle, perched on a promontory joined to the mainland by a narrow neck of land, with almost sheer cliffs on the other three sides. The cliffs reach 90 feet in places, while the level surface of the castle promontory is some 30 feet below the level of the surrounding mainland cliffs. The Castle is accessible but only via a steep and irregular path. A more sensible option might be to enjoy the view of the Castle from the Moray Coastal Path unless you are fit and adventurous and want an authentic experience. 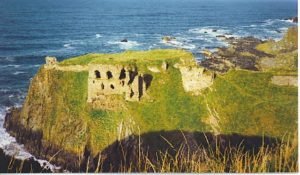 The approach had two deep channels cut into the rock. These channels were spanned by a drawbridge that could be raised prior to an attack.   Access to the castle was limited to foot traffic, so a small forecourt enclosure, a simple rectangle of stone, was built on the mainland to receive horses and act as a reception area for visitors. Standing above the Castle on the Coastal Pathway, you can marvel at how this was all engineered and still wonder why they chose to build on this site.
As is often the case in Scottish history the castle’s history consists of a maelstrom of squabbles alongside changes of ownership. Associated with the Sinclair family and built in the style of their family seat at Roslyn. In 1560  Mary Queen of Scots was refused entry to the castle, resulting in another change of ownership. In the middle of the 17th century,  the Ogilvie family moved to more comfortable premises nearer Cullen. Presumably less windy. 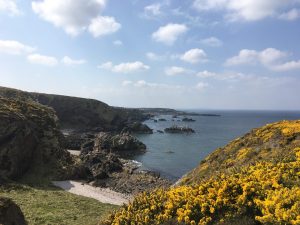 Some people will suggest you look out for the Findlater Castle ghost – supposedly a young boy that fell out of one of the Castle windows. I will leave you to draw your conclusions on this.

As you leave your car in the car park and walk to the Castle, you will see a beehive structure of the Findlater Doocot or Dovecot.  Built-in 1500, restored in 1992, this is well worth the time to explore.

Not to be Missed – the Doocot.

The Doocot contains 700 nest boxes for birds to nest and represents a symbol of status and power as only the local Laird was allowed to own a Doocot.  Pigeons and Doves at this time were an important food source and were kept for their eggs, meat and dung. Once you have seen this Doocot, you might notice two or three Doocots in the nearby areas. 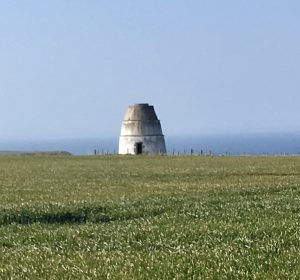 No matter how you visit the Castle or how much time you spend there, it is a truly dramatic sight to behold and certainly not to be missed while you are in the area.