Travelling today in Scotland inevitably means touring some of the most beautiful roads you can imagine. It also means being immersed in living history. That is certainly the case when you drive the The Snow Roads. This spectacular road is a 90-mile route between Blairgowrie and Granton-on-Spey. Most definitely my favourite route if I am driving to or from Edinburgh.

As you travel this road you will be following part of Scotland’s Military Road network. Often referred to as General Wade’s Military Roads you can find many of these roads all over Scotland.   The then British Government commissioned these roads after the 1715 Jacobite rising.  They roads were designed to suppress and exert control over the local Highland population by increasing the supply chain to established military forts and barracks.

The original route was originally constructed east of Braemar. It crosses the river at Invercauld Bridge and continues to a point opposite Balmoral Castle. This section of the A93 is you will see labelled Old Military Road on your map today.

From Crathie the road continues northwards via the original Bridge of Gairn to Corgarff Castle. You just might need to ask my husband for his Gairnshiel Bridge story! 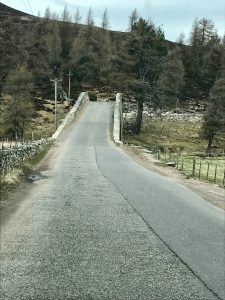 This is the point to stop at The Watchers and admire the scenery. Just imagine the history this route has seen. The castle resulted from the government purchase in 1746 and subsequent fortification of one of the Earl of Mar’s hunting lodges. It was part of an attempt to reduce the incidence of cattle-rustling in the area. 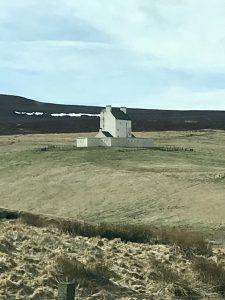 The road today continues northwards over the Lecht pass and Tomintoul on virtually the same route originally designed by General Wade. Beyond Grantown-on-Spey the road ran north and west, crossing the powerful River Findhorn at Dulsie Bridge. The end of the route was the Military Fort at Fort George just outside Inverness.

So, if you are travelling the Snow Roads you will be following General Wade’s Military routes and are part of Scotland’s living history so just imagine those that have gone before you.

Then if you are in Carrbridge then take the time to enjoy the walk around Dulsie Bridge on the road to Cawdor Castle. Admire this feat of engineering that would be some sort of achievement today let alone 300 years ago.

Moray offers so much to do for an outdoors person sometimes it is hard to drag oneself to visit a museum. However here are two worth making time for.  We have a choice of excellent Museums in Moray. Some are attached to Visitor attractions and are still in use today. However, here are two that close to us that I can recommend:

Elgin Museum – Scotland’s oldest independent Museum. The Museum tells Moray’s story from the arrival of people in the area around 8000BC to the Picts (3rd – 9th Centuries AD).

This part of Moray has a rich heritage left to us by the Picts and the Museum is an excellent place to start learning about their lives. As you drive and walk around the County you will find more and more evidence of their settlements. The Burghead Bulls are a good place to start.  Don’t forget to check out Sueno’s Stone after your visit. The evidence of the practice of beheadings during the Iron Age period is another reminder that Scotland has a lot of history!

Moving on to more recent times we have the excellent:

Morayvia – Moray’s award-winning Sci-Tech Project. Your chance to get close to a number of both RAF and Search and Rescue aircraft and helicopters. Check out a Cockpit.  Chat with experience aircraft engineers to find out how these machines work. This really is a truly unique opportunity to experience these aircraft.

Things To Do
Visit Blervie